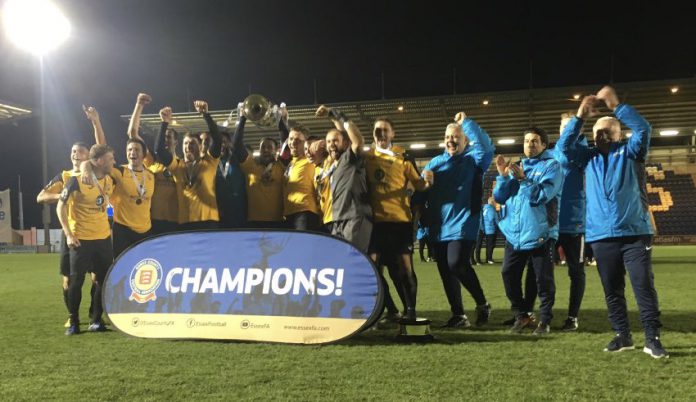 DESPITE the winning margin, Tuesday’s night’s first ever Essex Senior Cup final win for the Rocks was very much a backs to the wall victory for John Coventry’s underdogs – who continued a ten year streak of setting new firsts for the club.

East Thurrock made a stunning start to the match, scoring inside the first 40 seconds and then adding a second five minutes later.

Then it was very much a case of holding on under a Chdelmsford onslaught – particularly in the first half when centre halves Steve Sheehan and Ryan Scott led a defensive effort that saw them keep out 16 corners and set piece moves around the box.

Every member of the Rocks team ran their socks off to upset the form book against a side riding high in the National League South, while Rocks are fighting a desperate relegation battle at the other end of the table.

On Saturday that struggle saw Rocks concede a goal in a defeat at Wealdstone after just 30 seconds, but the boot was on the other foot at Colchester’s JobServe Community Stadium where Alex Osborn blocked an attempted clearance and squared the ball into the path of Danny Harris who finished from close range.

And things got even better in the fifth minute when Osborn again caused problems for the Clarets defence and the ball broke for Ben Marlow and the former City player’s deflected shot looped past keeper Nathan McDonald.

From then on, other than the occasional counter attack, it was all Chelmsford as they laid virtual siege on the Rocks goal but steadfast defending kept them at bay – with keeper Jack Giddens rarely troubled as his amber-shirted teammates countered everything Chelmsford could throw at them. And at the heart of the rearguard action, Scott and Sheehan were simply superb, winning header after header.

Having held the lead until the break Rocks found themselves more in the game as an attacking force in the second half but the majority of possession was still with Chelmsford and eventually the East Thurrock defence was breached on 72 minutes when Mickey Spillane stooped to head home.

Rocks have been fragile throughout this season, often conceding multiple goals in quick succession, but for once they dug deep and responded in the best possible way by adding their third just two minutes later.

The creator was Sam Higgins who used pace and strength to outmuscle a defender and cut the ball back for Osborn who rifled it into the roof of the net.

Chelmsford continued to press and things might have been different had not referee Elliot Kaye waved away what looked a good penalty claim after Jordan Chiedozie went to ground in the box but there were few other nervy moments as Rocks held firm and – after four minutes of added time – lifted the trophy for the first time in the club’s history – just three weeks before the club celebrates its 50th anniversary.